"I've Been 'Buked and I've Been Scorned"

[Luke 22: 63-65. The men who held Jesus in custody were ridiculing and beating him. They blindfolded him and questioned him, saying, “Prophesy! Who is it that struck you?” And they reviled him in saying many other things against him.”]

When my younger niece called and asked me if I knew my mother’s real name, I was surprised that she was surprised. “It certainly is no secret,” I told her. “Everybody knows that Mama made up her name.” In fact, I went on to explain, all of her names were self-constructed, and done at a very early age.  Until that conversation I had not made much of that fact. It was just the way it was. But then, has it not ever been so, in all communities and cultures?  Names are bestowed at birth, or soon after, in many cultures. In some, the name is whispered in the infant’s ear. At some point in the life of the children of other cultures, the name is earned and confirmed by the community. And especially in our American history, the names of immigrants were almost of necessity or out of expediency or disdain changed to suit the interrogator or the individual who wanted to assimilate.

In African American culture, the name of any individual can be adaptive to the extreme. Just who was “Frederick Douglass” can become a challenge to be puzzled out while reading any or all of his narratives. Sojourner Truth. Malcom X.  The central characters in almost any foundation novel in African American literature (with Morrison’s Song of Solomon setting the standard for the naming ritual in hyper-drive).

So my mother named herself. Lolita Arralean Luster – not any element of that name was bestowed upon her at her birth.  And since she was not going to have “LAB” on her license plate, she shifted her name to “Arralean Lolita [Brown]”. Only in becoming reintroduced to her one piece of professional writing has it become clearer to me – this woman removed the signs of victimhood from her identity – if not entirely from her mind and spirit – by calling herself names of beauty and music and freshness.

In the year before the destruction of the World Trade Center buildings in New York City, my mother, fighting and resisting all the way, finally created a brief memoir about a relative, her mother’s sister, “Aunt Sue.”  The essay was to be part of the series that Nikki Giovanni had been editing, concerning relatives, from grandfathers, to grandmothers, to uncles and then, to aunts. But the upheaval of the times did not permit the publication of the collection about aunts. My mother wrote the essay and, as she handed it to me, declared, “Don’t ever ask me to do anything like this again. It was the hardest thing I have ever had to do.”  No. The hardest thing was surviving the atrocities contained in the story from one part of her life. And in surviving the other abuses of the body and soul that she endured before she was ten years old. Physical abuse; sexual abuse; separation from her mother. Whoever the world tried to make her become, she named herself; and in that act, and in many other acts of survival, she made herself into her self.  Her essay is presented here, with a comment afterwards, to complicate with a degree of cosmic irony, some of what followed after the story she put into my hands.
********************************************
AUNT SUE
A few things I remember and some I repeat from family conversation about “Aunt Sue.”  May her soul rest in peace.

My mother said Aunt Sue, her sister, persuaded her to bring me, at about age two or three months (in early 1911), to Arkansas to live with her family.  And she could work while Aunt Sue and her family kept me.

Sometime during the “sitting” period, Aunt Sue gave me paregoric to keep me asleep as much as possible.  Also her husband, John White, kicked me off the porch with the statement to her “to get rid” of me as he didn’t want any “bastards” with his children.  Presumably I was about 6 months old at the time. I was born in December, 1910. 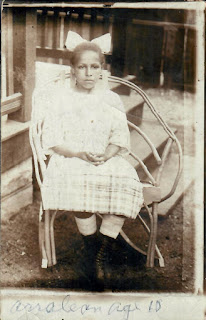 My mother found a family by the name of Partee who wanted me, so she handed me over and went back to Tennessee and subsequently I was with Fannie Partee-Wiley until I was 10 years old.  I lived in several cities before that age.

Aunt Sue had helped to keep Mother and her husband separated by that time, so she took over.  Mother worked in East St. Louis, Illinois, at the “Glass Factory,” and supported all of us.

Mother got a vacation and she and I went to visit her brother Ben in Bemis, Tennessee, and while we were gone, Aunt Sue told the social workers that Mother was not a “fit mother,” so I was taken to the Detention Home and Mother was forced to go to court to get me back.  I stayed in the home almost a year. I was in the seventh grade at the time, and I was in Miss India Maxwell’s homeroom at Lincoln School, in East St. Louis.

Years later, while Mother and I lived with the original family who had taken me in (the Partee-Wileys), she and Aunt Sue got into an argument. I don’t know all the details, but Aunt Sue lived on South 25th Street and we lived on 26th and Tudor, and Mother went to see Aunt Sue to try to clear the problem up and Aunt Sue drew a gun on Mother while she stood on the front steps.  The gun did not fire, which is why Mother lived, but I don’t think the argument was ever cleared up.

Years later, Aunt Sue persuaded my grandmother (Alice Pirtle) to come and live with her, then mistreated her and my grandmother left her and ended up living with Mother and me and my family.  While my grandmother was still with Aunt Sue she “ran away” and was found many miles from home and brought to us.  Aunt Sue came to try to make her return but she refused.  My grandmother lived with us until her death at the age of 101, in 1949.

Aunt Sue had a daughter, same age as me, who had a son who was born blind.  I was told that she would not let her keep the child, but sent him to an institution for the “unfortunate,” where he was educated well enough to take care of himself.  When he left it, he had been a switchboard operator, among other things.  His father’s sister brought him to East St. Louis to live with her.  It is my understanding that he receives a pension, so he is not a financial burden to his aunt.

Many years later, I had major surgery and vowed that if Aunt Sue died before I did I would not be at her funeral.  She died while I was recuperating, so that ended the story. --ALB (2001)
********************************************
In the past I have honored my father as my primary teacher in all things cultural. It was always my intuition that my mother gave me the real writing skills, even though no one in those days would have been able to tell me that the skill manifested itself in how she used words in the storytelling, not necessarily in the transcription. But, oh, the playing with language. A skill that still circulates at every family gathering. She had the narrative impulse. And she had the pain of life that could never be easily disclosed.

What is the irony? When my family moved back to East St. Louis, Illinois, in 1965, after nine years of extreme hardship in Beloit, Wisconsin, the only house they could find that was affordable, was the house where Aunt Sue had died (in 1954, I think). The major surgery that my mother mentions was the removal of a cancerous kidney. And yes, her recuperation period was long and delicate. Aunt Sue had some condition that did not allow her to lay in a bed and sleep, so she had to sit in a chair, during the night.  Being a child, myself, no more than ten years old, I did not interest myself in such details. I know that my grandmother never stopped visiting her, and taking me and my younger sister on those visits. We walked from 20th Street to Kansas Avenue; and back. And I wondered how the old woman could endure so much pain.

But now I know that it was not about Aunt Sue’s pain, but the radical forgiveness that is spelled out in my mother’s memoir – how her mother walked past the abuse, singing to still her anxious heart. And how my mother went many steps further than the Spiritual that says, “I told Jesus it would be all right if He change my name.”  What radical saints are our ancestors. They told Jesus it would have to be all right because they were going to change their names.

And live as they defined themselves.