I.
No
They told the first one
and then
year after year another   no   until
the house was built  the clothes were
stitched   the old castaways  and the invisible
babies were fed  and soothed

II.
it was how
she walked up the path
mother prayers
grandmother secrets    the dreams
of babies had been rolled up carefully
in remnants from the quilts    packed
into the satchel
she dragged along

III.
Teaching
touching   holding  more
tightly  the very ones most afraid
the world
became a festival of heroes   where not
even dreams could root

But when the lightning flashed that summer morning
And the corrupted sermon that had long silenced
The mother-wisdom and ways of her house
came hurtling back the air
she screamed
her loss
another old woman
(placed there
I know   by the one who refused English to ever
touch her  teeth)
said, “But you learned it all
any way you could"

once again
went away
and came back
overflowing for our feast

Was she conjure woman?
Yes.
No one
knew how  deep her eyes
could see

Sr. Mary Eva Regina Martin, SSF.Born in Grand Coteau, Louisiana, in 1939.  Entered the Congregation of the Sisters of the Holy Family on September 8, 1959, professed First Vows on August 15, 1962, and Perpetual Vows August 15, 1967. Masters in Black Theology from Xavier University. Doctorate in African American Studies from Temple University (1994).  Educator and Administrator of Catholic schools in Louisiana and Texas. Curator, Archivist, Consultant.  Sr. Eva Regina was elected to leadership in her Community and served as a General Councilor, Vicar General, and succumbed to death, April 7, 2014, while presiding in office as Congregational Leader.

"Sometimes It Causes Me to Tremble"

When we gathered in the conference room we were bringing pocket crumbs of hope. Or maybe we were bringing a loaf each; or a small fish – hoping for someone to transform our fragmented and tightly squeezed dreams into a full meal. The great-souled artist brought a blocked-out quilt presenting the panorama are eyes hungered for: East St. Louis. July, 1917. Mass graves. Ida B. Wells. Du Bois. Garvey. Daisy Westbrook. Survivors with burn scars and amputations. News accounts leveling the blame squarely on the perpetrators.  The woman who refuses to let all our journeys from “can’t to can” be forgotten, flung her bag of possibilities into our minds like grains of wheat. The man who led the rescue of the books, the papers, the memories of our childhood learning was wheeled into the circle to remind us that the past is never past. The veteran teacher who still reads something new every day and challenges all of us to speak and teach and write with the eloquence which is our communal charge. The man who has spent a life praying and working for justice brought his steadfastness as a balm. Young professors who accepted a call to gather the reflections of their peers and explain to us all what we may have never really known – or admitted. The woman who was slain in the spirit of the stories she found and flashed them on the screen carries the pictures of indomitable stubbornness and grace from one side of the country to the other. Oh, and there was the no-longer little boy who heard his old folks say, often, “Yes. It was terrible. We hid people under our porch.”  His haunting also needed to be freed, released. 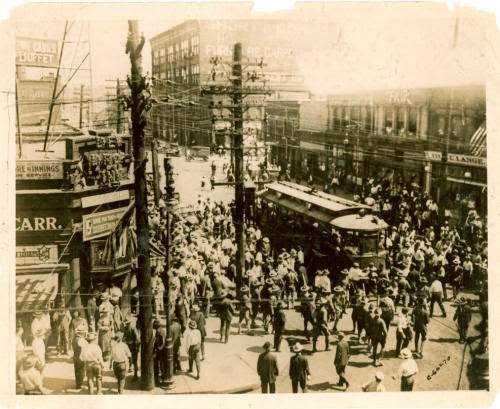 Anecdotes and snippets of genealogy worked to get us to the table, better than any security guard at a metal detector.  “Who are your people? Who were your teachers? Why do you still care about this city?” These are the East St. Louis identifications that are conducted at almost every gathering. Quietly and politely, but carrying significance nevertheless.  The man entrusted to be the steward of the city was the prayer he called for, to start the meeting. Because he knows the story has to be told in multiple layers, multiple rhythms and multiple tongues he said, “It must be so. It must be right.” And we sat ourselves down to the task. Even those like the griot and the judge, who could not attend, hovered in the room.

Oh, the story has never been told. For at least an entire year back then, the unrest in East St. Louis simmered, bubbled and flared up, repeatedly. From the meat-packing plant workers in 1916, to the laborers at the Aluminum Ore Company in in the late spring and early summer of 1917, the elements were being assembled. The factors affecting what would be called the “Race Riot of 1917” seem frighteningly familiar to us, today. Fear of gun-carrying “interlopers”; accusations of waves of scab laborers and an influx of “colonized” black voters to rig elections in favor of Republicans (the political party favored by many African Americans of that era).  Hysteria was ramped up and seemed as pervasive as the influenza outbreaks that would cripple the U. S. just months later.
So, white citizens stocked up on firearms. Politicians engineered more and more restrictive and intrusive schemes to limit the ability of African Americans to vote in local elections. Trains were met by mobs. Black workers were taunted as they entered and left the workplace. Any suspicion was elevated to fact. 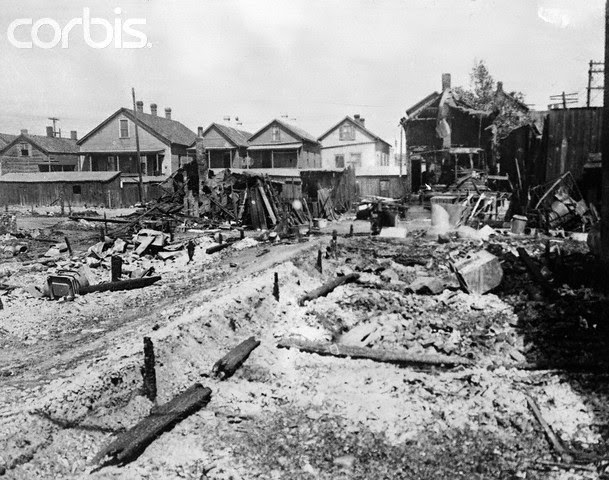 Every doubt was transformed into certainty:  the city must remain white and the Negroes must be forced to leave.

Those gathered in the room with the windows showing the late morning rainstorm knew that finally, if the city were to be honored for surviving relentless efforts of social, political and economic eradication, there had to be a healing of the land and a healing of the memories. How does a city survive 100 years of post-traumatic stress? By dressing with elegance; by conjuring up acolytes to trumpet-playing Gabriel himself. By teaching every child as if that girl, that boy, can someday advance medicine, negotiate treaties, make words slap the ears and the hearts with intensity and truth. By telling the world that, yes, we were there; yes, when we even tiptoe near the story of that awful time in July, it causes us to tremble, tremble; tremble.  By preaching – sometimes, even, by words – and reminding one another and total strangers standing on the corner of 25th and State -- that “We are here not to be the failures that everybody expects, but to be the harvest that everybody needs."

Around the room the ideas flew into the air like hummingbirds.  Overlapping call-and-response was a much better guide than Roberts’ Rules of Order. But no one was disrespectful – after all, we had a mayor, two ministers and several legendary teachers on site and in sight. Several times, the recognition moment occurred. Yes. That is exactly what “I/We” have been saying for 5, 10, 20 years.

No one disappears as long as their prayers linger in our souls.

But the questions that have surfaced are these: Will we be commemorating the riots (massacre, lynching, terrorism) so that we may finally begin to know enough to heal the land and restless souls? Will the commemoration in 2017 be a turning point in the life of the city, one that will be good for those who remained, who survived, who grew into magnificence? Or will the events actually do more to prepare the city for an influx of people for whom history is an inconvenience at best, or a nuisance at worst?  In the Sunday, April 6 edition of the New York Times there are two stories that attach to these questions. One, a photo essay about reconciliation in Rwanda is compelling and humbling. Some of the perpetrators of the violence sought out some of their direct victims and asked for pardon. [http://www.nytimes.com/interactive/2014/04/06/magazine/06-pieter-hugo-rwanda-portraits.html?ref=magazine]  Both perpetrator and victim are pictured, close to each other; looking at the camera, formally posed, they ask the viewer: “Can you step where we stand?”

That will be a question for all those whose souls still tremble when they realize that parts of them are “still there” where ancestors were crucified and where ancestors carried out the killing. The other NYT entry reports on the Mississippi Civil Rights Museum, to be opened in 2017, and which has already done much collecting of artifacts and spirit-filled texts concerning the bloody history of that state, of those people. [http://www.nytimes.com/2014/04/06/us/civil-rights-sins-curated-by-one-of-the-sinners.html?ref=us&_r=0] The Museum is under the control of the State of Mississippi and many of the survivors and relatives of those who perished are of mixed minds about the eventual story that will be told, and about who will control the telling. But they, too – like the men and women of Rwanda who have walked to the place of forgiveness – say that they cannot live – perpetrator and victim, both – unless the truly liberating story is told. And then, just maybe, the song will heal us all. [https://www.youtube.com/watch?v=TFOsVxQ_SmY&list=PLbrjbumNvOk2Sd7GI25ZEMsaK858RVNQN&index=9]