When I was a very young Jesuit (known as a “scholastic”), studying in our humanities program (known then as “the Juniorate”), I still carried the determination to be an historian. Some of my earliest recollections are rooted in stories; just that, stories – told by my paternal grandmother, my father; my mother, very rarely; and all sorts of neighbors and visitors to our home. My grandmother, Laura Brown and her son, my father Floyd, were formal, conscious instructors of history. They told me stories. Mom showed me the pictures she kept in a bag in her bedroom. “This is my sister, Mary, and me.  This is one of our old family friends. This is… and this is… and…” And I drank in the stories. My father provided commentaries on the pictures in the magazines and newspapers he brought home every day, every week. “You see this man? He is Dr. Du Bois. I met him at Wilberforce….He… And this woman, here, I knew in school (Josephine Baker)…And this man (Earl Hines) was playing the piano in Chicago when I met him… And….”

And I drank in the stories and memorized the faces.

What other option could I possibly have had, but to be someone who remembered – or found – the old stories about the old people and saved them up, somewhere in the room of my mind, to share them with the next set of young people “in the family”?

But, then, in the Jesuit juniorate, we had a mandatory U. S. history course, taught by someone who was, in my mind, most charitably, a near-total disaster as a human being. And he wasn’t – in my mind – a very good teacher either. So, in a moment of extreme shortsightedness, I said to myself, “if that is a history professor, then I won’t be one.”  No one ever accused me of infallible judgment. Not in those days, anyway.

Now, fifty years later, I am reflecting on how everything I teach is modeled on the pedagogy so brilliantly employed in bedrooms, living rooms, automobiles; and on front porches. Every class, no matter what the subject matter is grounded in history. Given the fact that Africana Studies, in all of its substantive embodiments, serves, first of all, as corrective to the perversion of world history, a perversion that has always been a principal strategy for economic and political oppression of so much of the populations of the world; given that, how can any of us not teach history?. 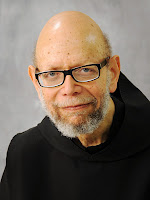 Knowing the power of history, I remember, salute, grieve and rejoice in knowing Reverend Cyprian J. Davis, Order of St. Benedict, monk of St. Meinrad’s Archabbey, who died on May 18, 2015. At the age of 84. He has “gone to that Gospel Feast…that Promised Land where all is peace.”
Cyprian Davis. Perhaps one of the most radically situated scholars of 20th century U. S. Catholicism.  Everybody and her cousin will bring up his writing of The History of Black Catholics in the United States, and all praise is proper and due to that accomplishment. But from the day when he decided to become a Catholic because of the soul seduction of the historical account of the Catholic Church, to his final days of preaching teaching editing and writing, Father Cyprian did much more than most to give a shape and texture and nuance to being “authentically black and truly Catholic” (a phrase he had much to do with, as one of the primary contributors to “What We Have Seen and Heard”, the U. S. Black Bishops’ Pastoral Letter of 1984).

As part of the 1978 gathering of Black Catholic theologians at the Motherhouse of the Oblate Sisters of Providence, Father Cyprian presented “Spirituality: The Christian Experience of the Black Experience.” Papers from that proceeding were gathered in Theology: A Portrait in Black.   In the style that is so much his signature, his nine-page, double-columned essay, has 27 footnotes and a bibliography with 26 entries.

The radical intervention he performed with this essay is a corrective every stereotype, every trivialization, and every dismissal of the power of the Black Catholic experience. Not only does he simply and quietly offer this corrective, he does something that most of the scholars subsequent to him, both in African American Studies and in Black Catholic Studies, no longer do. He takes us, the readers, “back to Africa,” and not in a delusional, romantic, obsessive way. No; Father Cyprian finds the sources, quotes them generously; interprets his examples and connects them (albeit in the quietest tone possible) to the presently-lived experiences of Black Catholics in the United States at the end of the 20th century.

The models he uses for the purpose of instruction and edification are presented in a way that is original and compelling. He says:

There are four Black models of sanctity in Catholic tradition. The fact that they were Black was and is as significant to their history as St. Francis of Assisi’s middle-class background is significant for him.

[Let the Church savor that concentrated challenge for a minute or two. “Black” is capitalized. OK. The people about to be listed are “models” – worthy of emulation. OK.  “In Catholic tradition.” Oh; you mean, Father Cyprian, that these “models” serve as examples to all Catholics?  Just asking…Since you use Francis of Assisi as context for this assertion, I figured you were going for “Catholic means ‘universal’”.]

The four are: St. Moses the Black, St. Benedict the Black, Alfonso the Great, and St. Martin de Porres. Finally, we would look briefly at a fifth person who was not of the Catholic tradition but still exemplified the same characteristics of the others within that tradition, namely Sojourner Truth.

Since this reflection is necessarily brief, there can be only the slightest bow of appreciation and astonishment at the way Father Cyprian sets up as bold an argument as can be imagined, back in the beginning of Black Studies as we were all learning it in the late 1960’s and 1970’s.  His linking of these figures from religion; politics; and politics and religion into an argument that challenges the traditional understandings of each of these exemplars. Moses the Black was one of the great figures of the desert monastic tradition. And several of the “sayings of the Fathers” attributed to him make quite plain that he was singled out for abuse and humiliation because he was black. Father Cyprian uses these incidents to assert that “only conjecture can suggest the possibility that his [Moses the Black’s] humility was more prophetic than accommodating.”

At the end of this essay, Father Cyprian says:

The spirituality expressed by five diverse holy men and women is striking similar in many instances. All five practiced a very practical form of charity and service to others….Suffering as a direct result of their black skin color was experienced by all. Suffering becomes an element in the spirituality.

Finally, one final word.  Humility is the favorite virtue that a dominant group wishes to ascribe to saintly representatives of the oppressed. “Humility” insures that the oppressed remember their subordinate position.

[Editorial clearing of the throat: Do you think Father Cyprian might have known something of the view of radical philosophers such as Fanon or Freire? In the midst of a reflection on humility, he goes for the “rule of the privileged class”? Say, Amen, please.]

This kind of “humility” – a travesty of the virtue – never seems to be attested to by the sources nearest to the saint.  Humility is the result of one’s encounter with God. Only in His presence are we conscious of our nothingness. But for the Christian this is never the whole reality; for it is the Word Incarnate that makes this mortal dust something glorious.

And so spoke Father Cyprian Davis, in 1978, as he helped parent into existence the Institute for Black Catholic Studies. Along with Thaddeus Posey and Joseph Nearon and and Thea Bowman and Bede Abram, Cyprian Davis was one of the founding faculty of the Institute; and like them he is also, now, another Saint gone marching in…”

At the end of Taking Down Our Harps: Black Catholics in the United States, which Father Cyprian edited with Diana L. Hayes, he talks about his place in our history and our hearts – even though he seems to be talking about the other contributors to the book.  As he refutes some criticisms levelled at Black Catholics by James Cone and J. DeOtis Roberts, Davis gently serves notice:

The Catholic theologian, Black or white, works within a tradition, a tradition, in fact, which has more of North Africa, Egypt, Syria, and the Mediterranean than the European model that Cone criticizes. It is within this tradition that the authors in [Taking Down Our Harps] have presented their works. In fact, they have done more. They have demonstrated that Catholic theology today must include issues raised by Black theologians. The same writers have shown that American Catholicism can no longer ignore the rich field of Black Catholic history.

Once, during a talk in Louisville, Kentucky, I took the opportunity to critique some preaching that had occurred during an enthusiastic Black Catholic liturgy that took place during an anniversary celebration of the Joint Conference of Black Catholic Clergy (including Black Catholic priests, deacons and brothers), Sisters, and Seminarians.  Needless to say, my critique was clear, pointed and probably just a little “over the top.” Nevertheless it was my own style.  Comparing three different styles of preaching known to the assembly, I mentioned, first, “Fr. Cyprian Davis. Now we all know that when Father Cyprian Davis begins a homily, it will be clear, precise; contain ideas that are fresh and challenging. We know that he will not bounce around or get too dramatic. And it will be a homily, not a revival.  I would call his style of preaching similar to sipping a very fine, rare and expensive brandy. The merest sip and you are warm all over.”  I then added my own style to the comparison…something along the lines of a very good, but not too expensive imported or domestic wine.  The third comparison – and the reason for the critique -- was to a performance that had taken place the night before. I merely said, “And last night what we had was a cheap beer…”

In fairness (and after 15 years, I can be fair), the target for that last remark is as good a preacher as we have in our community of Black Catholic clergy today.  As I said to him, then, better me than Thea Bowman offering a critique. Oh, yes, dear Lord.

Father Cyprian Davis, OSB. One of the finest, most compelling of our elders. A teacher and a preacher and a prophet. You made us alert and warm and grateful.

And it was a journey that was a grace for us all.